The flood of releases continued this year. DVDs from the Newport Folk Festival 1963-65 and a deluxe box with Dont Look Back including a DVD with extra material,  soundtrack to the movie I’m Not There and also a 3-CD deluxe box with 25 years of recordings and a deluxe presentation of The Traveling Wilburys catalogue. The Awards kept coming, two more Grammys and the prestigious Spanish Prince of Asturias award in the Arts category. This year also saw the first exhibition entirely devoted to the painting art of Bob Dylan as the Drawn Blank Series opened in Chemnitz, Geermany. And of course The Never Ending Tour did not end this year, the 2000th show was played during the Fall Tour in Dayton, Ohio. 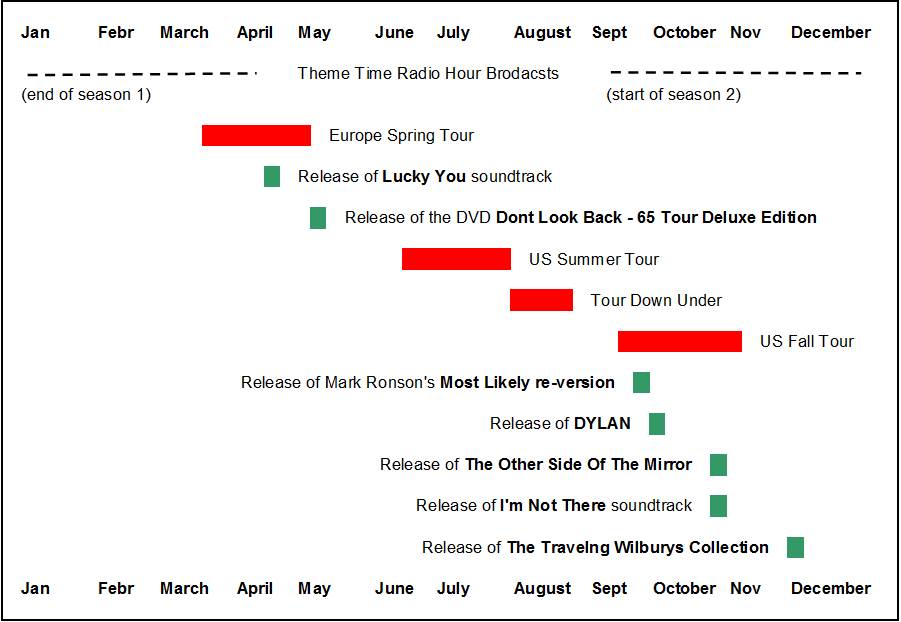 The album contains the following tracks:

Here’s a rundown of what’s on the second DVD:

·        working at piano on what later turns into It Takes A Lot To Laugh, It Takes A Train To Cry and going aboard a plane in New York City.

·        meeting fans in Sheffield and Liverpool the next day

·        working at piano on It Takes A Lot To Laugh, It Takes A Train To Cry probably in Leicester 2 May

·        the end of The Lonesome Death Of Hattie Carroll from De Montford Hall, Leicester 2 May

·        Sweetheart Remember Me performed in hotel in London

·        Let Me Die In My Footsteps – hotel performance, with song without words

2.      Most Likely You Go Your Way (And I'll Go Mine) – original Blonde On Blonde version

This is a double CD with the following songs:

Volume 1 contains the album Traveling Wilburys Volume 1 + bonus tracks Like A Ship and Maxine, previously unreleased. For more details please refer to the session page for 7-17 May 1988.

Volume 2 is a DVD containing a film entitled The True History of The Traveling Wilburys anf the following promo videos: Handle With Care, End Of The Line, Inside Out, She’s My Baby and Wilbury Twist.