So Much Older Then

After two years of extensive song writing the pace slows down. More and more of Dylan's interest in writing shifts away from song lyrics first to poems, then to prose. In a number of interviews he talks about a novel and also about several plays. None of these have however seen the light of day. One recording session in June results in his fourth and last solo album, Another Side Of Bob Dylan. 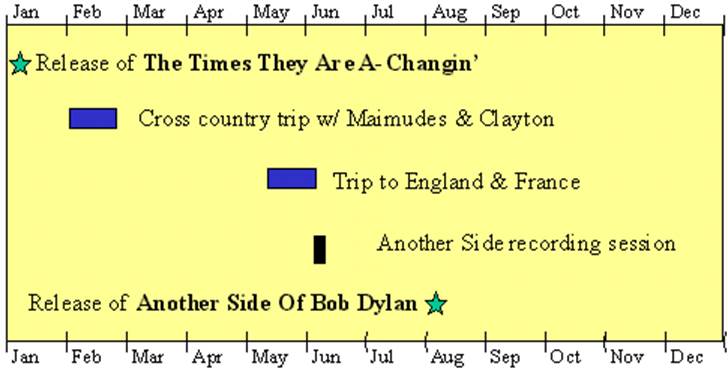 Here’s an incomplete list of live appearances in 1964, J means that a recording has survived. 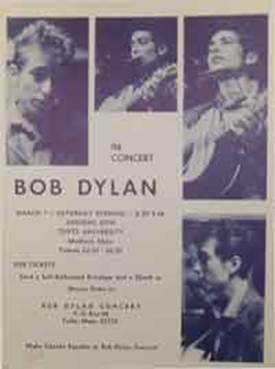 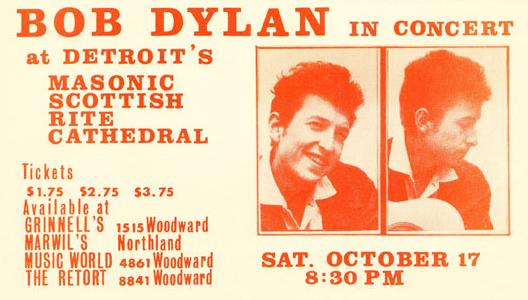 Handbill for the 7 March concert. 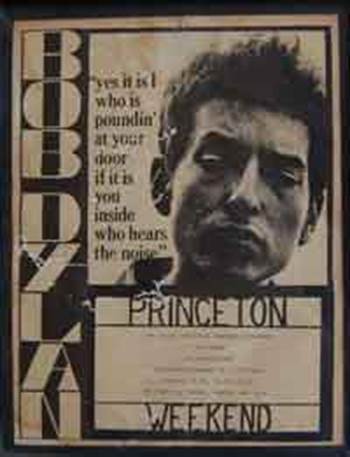 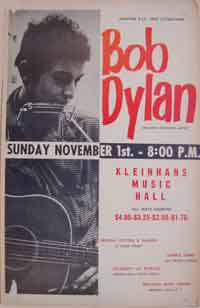 For details about these recordings please refer to the corresponding session pages in Still On The Road.

This album was recorded in one single session between 7 and 10 p.m. on 9 June at the Columbia Studios in New York City. The following songs were recorded:

None of these songs had been recorded before June 9.

The following songs have never been played live:

Spanish Harlem Incident has not been played live since 1964.

All I Really Want To Do was last performed during the 1978 World Tour. It was rehearsed with both Grateful Dead in 1987 and with G.E. Smith before the start of the Never-Ending Tour, but has not been played since at the time of this writing.

Chimes Of Freedom was played regularly in 1964 and then revived in 1987 with both Grateful Dead and Tom Petty. Since then it has not appeared with the exception of the inauguration of president Bill Clinton in Washington 17 January 1993.

To Ramona, My Back Pages, I Don't Believe You, and It Ain't Me Babe are all part of the regular Never-Ending Tour repertoire.

A Letter To Larry – Letter to Lawrence Ferlinghetti, The Telegraph #36

Another Side Of Bob Dylan – Homer, the Slut #6

Bob Dylan At Newport 1964 – Bill Allison in The Telegraph #9

The Witmark Demo Tapes – Clinton Heylin in The Telegraph #16

[2] Official theme song for the 1988 Amnesty International tour, where it was played by Bruce Springsteen and the E Street band, released on CBS maxi-single  "Spare Parts", 1988.

[4] Recorded in 1965 during the BRINGING IT ALL BACK HOME sessions.

[5] Also recorded during the SELF PORTRAIT sessions in 1969 and later with George Harrison. Covered by many different artists and groups, e.g. by The Original Marauders on their album "Now Your Mouth Cries Wolf: A Tribute to Bob Dylan", Pied Piper 1977. Played live by Dylan once in 1974: afternoon show in Philadelphia, January 6. A number of duets with Joan Baez during the Rolling Thunder Revue and finally a number of acoustic performances during the Never-Ending Tour.

[6] Released on single in the Benelux countries, Covered by a number of artists including Fairport Convention (in French), The Flying Burrito Brothers and Rick Nelson.