In the Smoke of the Twilight

A SUMMARY OF RECORDING & 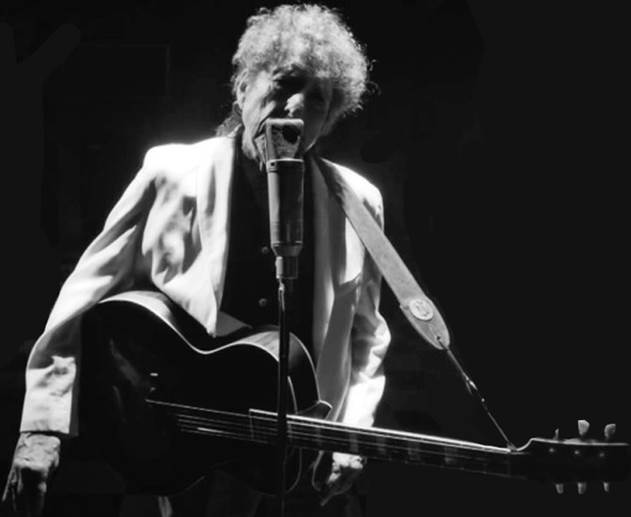 © 2021 by Olof Björner and Daniel Mackay

This text may be reproduced, re-transmitted, redistributed

and otherwise propagated at will, provided that this notice remains

As the world continued to struggle with the COVID-19 pandemic and political unrest flared in the United States, Bob Dylan reached his eightieth year. Having achieved his fourscore allotment of years, Dylan spent May filming a concert film that featured new arrangements of thirteen of his songs that was released online in July: Shadow Kingdom: The Early Songs of Bob Dylan. Sony continued to release retrospective collections of Dylan’s work, with the 16th volume of the Bootleg Series covering outtakes, alternate takes, and rehearsals from 1980-1985, and the release of Bob Dylan – 1970. Meanwhile, Dylan took to the road again for a twenty-one-night tour with two new band members after twenty-three months off the road. 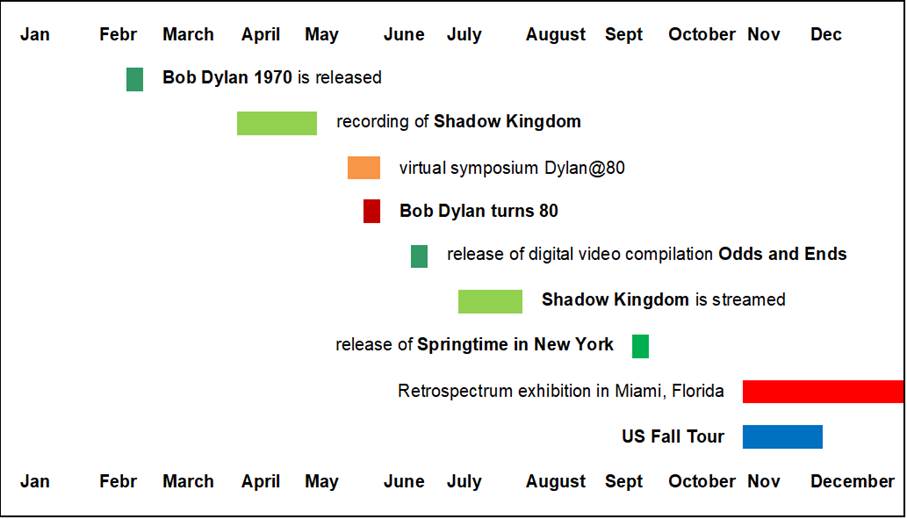 This concert film, directed by Alma Har’el, features Dylan performing thirteen of his songs with a new band of musicians with whom he has not worked in the past. The film was shot in Malibu in May of 2021 with the audio track and video recorded separately and Los Angeles-based actors as the audience.

The film aesthetic appears to be an extension of what he has been working on for twenty years, once he began to take more of an active hand in his televised performances.

Larry Charles has discussed Dylan's interest in having all of the band in the main shot during their performances in Masked & Anonymous so that there were minimal cutaways. This aesthetic runs contrary to the dizzying quick cuts and swooping camera shots of Unplugged and Woodstock '94.

This film aesthetic is now pushed further with the implementation of compositing in an audience in the foreground by using green screen technology.

Dylan is finally using film technology to fill out the frame and create the image he wants, which harkens back to the juke joint image that is on the cover of Rough and Rowdy Ways and is also a little reminiscent of how some of the clubs may have been in Greenwich Village in 1961.

The black & white is perfect. Obviously, Dylan likes the noir look. Early on, he used a black & white image for the "When the Night Comes Falling from the Sky" and "Emotionally Yours" videos and a bit later the "Blood in My Eyes" video shot in London and, more recently black & white for the noir-influenced "The Night We Called It a Day" video. The "Beyond Here Lies Nothin'" video is not black & white but kind of a monochrome sepia.

Also, Dylan is obviously no longer featured in close-ups, a preference that we were able to observe from how he had himself filmed for his interview for the American Masters documentary, Joan Baez: How Sweet the Sound (2019). I was surprised at the close-up of Dylan that Scorsese framed for the interview sections of Rolling Thunder Revue: A Bob Dylan Story by Martin Scorsese (2019), it stands out as unique in his film and television appearances of the last ten years, which demonstrate a preference to have his profile obscured in shadow and shot from a distance.

* Session guitarist and Rick Springfield alum Tim Pierce posted a video in which he was interviewed on his "Tim Pierce Guitar" Youtube channel on 29 August 2021 where he claims to have performed "thirty songs live off the floor in April and May with Bob Dylan, so I got to work with him up close, and we were all sitting in a circle." This sounds like the recording of Shadow Kingdom, which would confirm the rampant speculation that some or all of the credited musicians in the film are not the musicians heard on the audio track of the film.

For further details please refer to the session page.

Bob Dylan – Springtime in New York: The Bootleg Series, Vol. 16 (1980-1985) is released by Columbia Records and Legacy Recordings in multiple formats: 2-LP and 2-CD “highlight” versions compiling alternate takes, outtakes, rehearsals, and live performances encompassing Dylan’s activity between Shot of Love (1981) and Empire Burlesque (1985), a 5-CD deluxe box set containing 57 tracks, downloadable and streaming versions of the 2-CD and 5-CD versions, and a 4-LP version that is the result of a unique partnership between Legacy Recordings and Jack White’s Third Man Records in Detroit.

11 tracks from the Fall rehearsals at Rundown Studios in Santa Monica, California in September and October 1980:

All songs by Bob Dylan except track 7.

5. Angel Flying Too Close To The Ground, 2 May

3 and 7 are new to collectors.

Dylan begins a 21-night tour of the Midwest and East Coast of the United States in Milwaukee, Wisconsin, his first concert in twenty-three months due to the COVID-19 pandemic. Dylan plays music theaters, debuting eight of the ten songs from Rough and Rowdy Ways and playing five of the songs featured in Shadow Kingdom: The Early Songs of Bob Dylan, garnering exceptional reviews, and addressing crowds during the band introductions, often including local references unique to each city. The six-person band includes two new players: drummer Charley Drayton and guitarist Doug Lancio, who replaces Charlie Sexton who played with Dylan for 1235 concerts (from 1999-2002 and then from 2009-2019) and who contributed to six of Dylan’s studio albums.

For details please refer to the 2021 US Fall Tour session file. 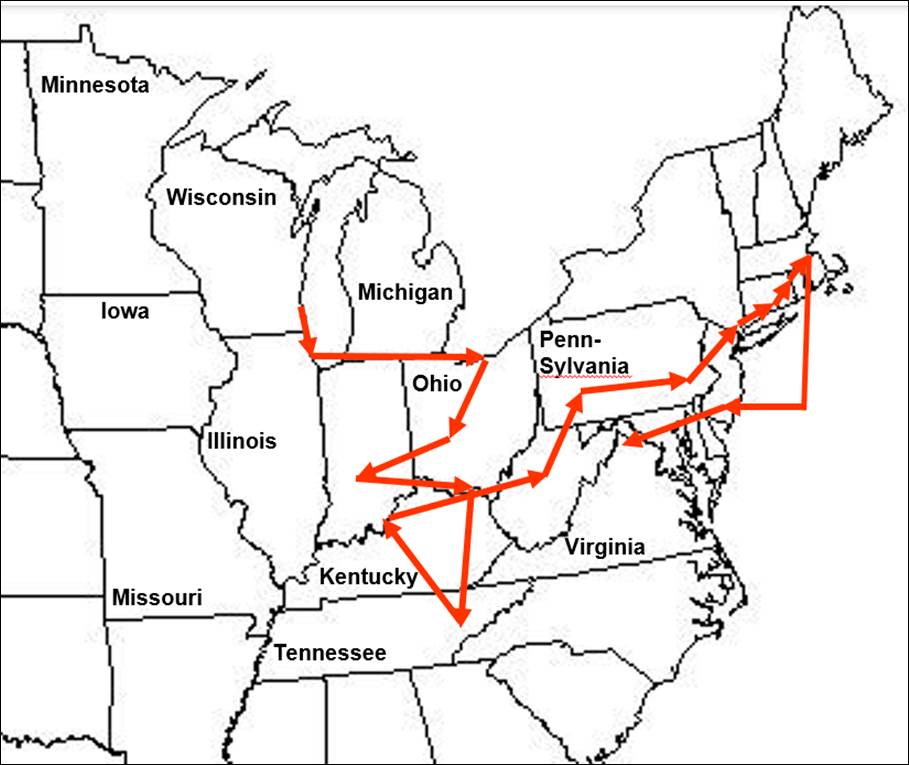 The following songs were played: