There were a lot of mixed releases this year, but no studio time. The releases included the Masked And Anonymous soundtrack with four songs recorded last year. The Gods And Generals soundtrack contained the new song ‘Cross The Green Mountain, also recorded last year. Sony introduced a new web-service called Custom Mix CD, where the customer could choose up to twelve tracks and had his CD pressed and sent home. This service was however discontinued at the end of the year. Sony also released fifteen Dylan albums in the new SACD Hybrid format.

And of course the Never-Ending Tour kept rolling on. This year Dylan played 98 concerts in , , US and . 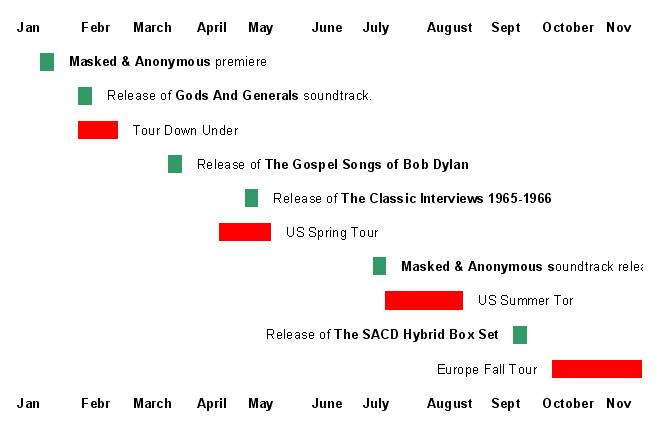 This soundtrack from the movie Gods And Generals contains the Dylan song ‘Cross The Green Mountain, in Scream Studios, Studio City, California, 23 July 2002 with the regular touring band.

This cover album contains a newly recorded version of Gonna Change My Way Of Thinking, a duet with Mavis Staples with mostly re-written lyrics. It was recorded with his touring band and Mavis Staples in a recording studio in 4 March nd released 1 March 2003 The tracks are:

A CD from Chrome Dreams released 10 May 2003 featuring the following interviews:

On the website www.custommixed.com Sony offered a new service where the buyer could mix his own CD by choosing up to twelve tracks. Bob Dylan was one of the first artists on the site. The following “rare” tracks were available:

In December 2003 Sony stopped this service.

The official Bob Dylan homepage on the Internet, www.bobdylan.com, did not offer any new tracks in 2003

A recording from the sessions at the Acme Recording in Chicago, Illinois, 3-5 June 1992, produced by David Bromberg, contains Sloppy Drunk, Polly Vaughn, Catskill Serenade and Miss The Mississippi.

This recording from the various New Morning sessions in 1970 contains the following tracks:

Blowin’ In The Wind, Blues

Girl From The , Love Minus Zero/No Limit

Love Minus Zero/No Limit, The Times They Are A-Changin’

Blowin’ In The Wind

Jokerman, Just Like A Woman, I And I, Tangled Up In Blue, Love Minus Zero/No Limit, Simple Twist Of Fate

It Ain’t Me, Babe, The Times They Are A-Changin’, Leopard-Skin Pill-Box Hat, Blues, Blowin’ In The Wind

The final five songs are now circulating: When You Gonna Wake Up?, Blowin’ In The Wind, City Of Gold, It’s all Over Now, Baby Blue